Focus group discussions about genomic data. Report for the use of the Genome Centre working group 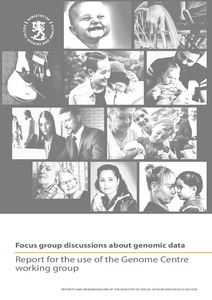 This report presents research findings from eight focus groups that discussed genomic data, their diverse uses, the risks and expectations associated with the data, and the establishment of a national Genome Centre. The discussions were held in four locations in 2017. The participants were people in different age, population and occupational groups. The concept of genome was unknown to many of the group members, but after having learned about it, almost everyone considered genomics research and the use of genomic data in healthcare to be a good thing. It was thought that genomic data can help to achieve better health and promote the common good. However, the discussions did not support the view that Finns would only be happy to give their data unselfishly for any kinds of uses. Motives for supporting genomics research were linked, in particular, to people’s own experiences of hereditary diseases. It was hoped that genomics research would help — if not the participants personally — then at least others in the same situation. The group members also set conditions and restrictions for the use of genomic data. In particular, the commercial exploitation of the data raised doubts. The return of benefits from commercial activity to Finnish healthcare or public health was considered especially problematic. It was also feared that inequality would increase and the healthcare system would have insufficient resources for the use of genomic data. Most group members hoped that they would be asked for their consent to the storage and use of genomic data.