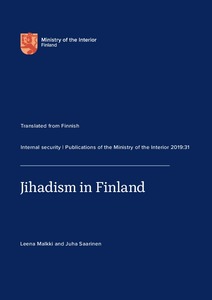 Publications of the Ministry of the Interior 2019:31
Näytä kaikki kuvailutiedot
Tweet

The aim of this study is to provide a broad overview of jihadism in Finland in the 2010s. The study is based on open source data that has been supplemented with interviews. Jihadist activism in Finland remains relatively low scale when compared to other western European countries, but the number of individuals involved has grown significantly during the 2010s. The most important factor contributing to this has been the conflict in Syria and Iraq, which, in addition to mobilising new activ-ists, has had a uniting effect on an otherwise fragmented milieu.

Despite this, the Finnish jihadist milieu is still mostly fragmented and unorganised. In Finland, jihadist activism consists mainly of small-scale, non-violent support activities. The most significant development has been the notable increase in travel to conflict zones abroad. The only jihadist attack to-date was the knife attack in Turku in August 2017, and there have been no publicly known serious plots.

As of early 2019, the most active growth phase connected to the conflict in Syria and Iraq seems to be losing its momen-tum. The activism that emerged in connection with the conflict has, however, had an indelible impact on the jihadist milieu in Finland.

The study was carried out alongside the Jihadist online communication and Finland study.