Government report on the National Energy and Climate Strategy for 2030 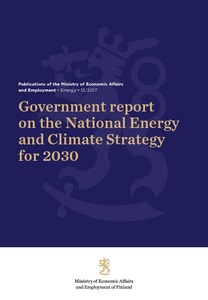 The National Energy and Climate Strategy outlines the actions that will enable Finland to attain the targets specified in the Government Programme and adopted in the EU for 2030, and to systematically set the course for achieving an 80−95 per cent reduction in greenhouse gas emissions by 2050. With minor exceptions, Finland will phase out the use of coal for energy. The share of transport biofuels will be increased to 30 per cent, and an obligation to blend light fuel oil used in machinery and heating with 10 per cent of bioliquids will be introduced. The minimum aim is to have 250, 000 electric and 50, 000 gas-powered vehicles on the roads. The electricity market will be developed at the regional and the European level. The flexibility of electricity demand and supply and, in general, system-level energy efficiency will be improved. Technology neutral tendering processes will be organised in 2018−2020, on the basis of which aid will be granted to cost-effective new electricity production from renewable energy. The share of renewable energy in the end consumption will increase to approx. 50 per cent and the self-sufficiency in energy to 55 per cent. The share of renewable energy use in transport will clearly exceed the Government Programme target. The domestic use of imported oil will be halved as planned. The greatest non-ETS sector reductions in emissions will be achieved in the transport sector, and this will be the foundation of the medium term climate policy plan of 2017