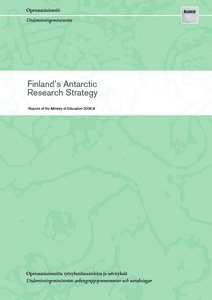 On 27 February 2007 the Ministry of Education appointed the Coordination Committee for Antarctic Research for the period 2007–2010. Among other Committee tasks, the Ministry called for development of Finland’s Antarctic research strategy in cooperation with science communities, taking into consideration the results of the evaluation of Finnish Antarctic research, as well as the development needs of national and global polar research.

Coordination Committee for Antarctic Research defined the vision of the state of Finland’s Antarctic research in 2015, according to which:

- Finnish Antarctic research in selected areas is at a high international level, recognised as such, and open to new directions
- Researchers take advantage of both national and international funding opportunities
- Interaction between Antarctic and Arctic region researchers is active
- Research is well coordinated nationally and the national funding for research and associated logistics will be at a level suitable for quality research operations
- Research results are published in internationally recognised journals and are communicated effectively to a wider audience
- Finland takes part in the decision making of the Antarctic Treaty System.
- Finland supports and actively develops comprehensive protection of the Antarctic region’s environment

As the means to achieve these goals the Coordination Committee for Antarctic Research defined:

1. Selective emphasis on strong areas of research
2. Increasing research collaboration
3. Finland will a maintain a research station and expedition efforts
4. Funding to be granted for larger projects
5. Greater utilisation of national and international funding possibilities
6. Finland will participate in the cooperation called for by the international Antarctic Treaty System