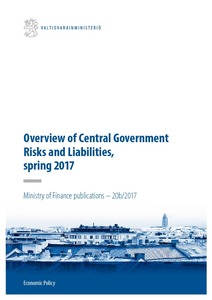 Fiscal risks refer to a range of factors that can have unpredictable consequences for government finances. Fiscal liabilities and associated risks may emanate from multiple potential sources within the state budget economy, government funds and state enterprises. In addition to state debt and pension liabilities, government fiscal liabilities mainly consist of guarantees. Fiscal liabilities may also accrue from the local government sector, private sector (e.g. government-controlled enterprises), or the financial market (e.g. the banking sector). Furthermore, the government often bears ultimate de facto responsibility for securing functions that are critical to society in terms of continuity of operation, even if it is under no direct legal or contractual obligation to do so. The government’s liabilities have increased sharply in recent years. There has been a particularly strong rise in the volume of government guarantees of Finnvera and the National Housing Fund. The nominal value of the government guarantees in focus here now stands at approx. 21% of GDP. This is a high figure by international comparison, although differences in reporting procedures make it difficult to compare the true nominal values of guarantees. However according to Eurostat data collected in 2015, Finland’s general government guarantees to GDP ratio was the highest in the EU at 28.34%. Likewise, Finland recorded the highest annual growth from 2014 to 2015 at 2.84% of GDP. Government fiscal risks may be broadly defined as comprising any deviations from budget forecasts that adversely affect the central government balance or budgetary position. These risks include macroeconomic shocks, market risks and other risks involved in central government assets and debts, and risks involved in the implicit contingent liabilities taken on by or otherwise falling upon central government. Several factors may work simultaneously to undermine the financial position of general government. Risks associated with macroeconomic development, general government debt, government holdings, export guarantees issued and other risks related to government liabilities correlate with one another. Typically, under conditions of normal cyclical fluctuations, only some of these risks materialise. The costs arising from the realisation of the government’s guarantee obligations may constitute a significant burden for the national economy. This underscores the importance of carefully monitoring and managing fiscal liabilities