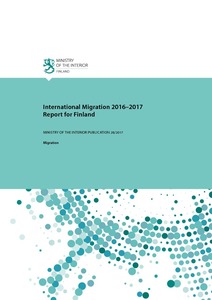 Commissioned by the OECD, a national report by Finland covering the years 2016 and 2017 provides a concise summary of Finland’s policies regarding immigration, key legal amendments, up-to-date statistics and a summary of the media commentary. On account of rapid changes to the immigration situation, Juha Sipilä’s government enacted a number of amendments to legislation which sought to enhance the control of immigration and to streamline processes. In July 2017, the Ministry of the Interior launched a project to draft a government programme on immigration. The state’s programme on integration was approved in September 2016. Efforts have been taken to promote equality and non-discrimination in various political sectors, including immigration. Improving conditions in the countries of origin of immigrants is one of the goals of Finland’s development collaboration. Improving living conditions is also the key in controlling immigration movements. Asylum policy and asylum seekers have been the focus of public discussion, with integration and the employment of immigrants being overshadowed by other factors. The report was compiled by the Immigration Department of the Ministry of the Interior. Several other ministries and agencies, such as the Ministry of Economic Affairs and Employment, the Ministry of Justice, the Ministry of Social Affairs and Health, and the Ministry for Foreign Affairs, contributed to the report in accordance with their areas of responsibility. The report has been delivered to the OECD in English and is, for this reason, published only in English in Finland