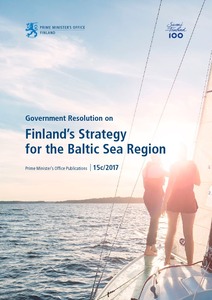 Prime Minister’s Office Publications 15c/2017
This publication is copyrighted. You may download, display and print it for Your own personal use. Commercial use is prohibited.
Näytä kaikki kuvailutiedot
Tweet

This document covers the strategic priorities of Finland’s Baltic Sea policy. The aim was to determine the direction in which Finland wants to develop the Baltic Sea Region in the near future at a global level, in its EU policy, through regional cooperation, and through its own policies and actions. According to its vision, a healthy Baltic Sea with its vital marine life is a well-protected and sustainably used resource. The Baltic Sea Region actively develops its know-how and uses its resources as a forerunner in sustainable development. The Baltic Sea Region is stable and safe. Finland works actively to make the Baltic Sea Region a global leader in the bioeconomy and the circular economy, at the cutting edge of utilising new technologies and producing model solutions for safe and clean shipping and the maritime industry.

The strategy presents forward-looking actions and policy initiatives or guidelines, which also aim to address any shortcomings in the implementation of currently effective action programmes and legislation while stepping up their implementation. At the same time, the strategy also outlines Finland’s national key actions stemming from the priorities, in order to promote the Baltic Sea’s good environmental status, safety and security and sustainable development, improve the Baltic Sea Region’s competitiveness, and ensure Finland’s prosperity.

The strategy also presents changes and challenges in the region as well as the opportunities they can provide. The deterioration of the security-policy situation in Europe and the Baltic Sea Region is acknowledged, but the strategy does not outline Finland’s security policy since Finland’s aims and methods for strengthening security in the Baltic Sea Region are already presented in the Government Report on Finnish Foreign and Security Policy (2016). This strategy concentrates on maritime and aviation safety and inter-agency cooperation in eg. emergency operations and fighting cross-border crime. The strategy also presents Finland’s aims for EU policies for the Baltic Sea. The role of local and regional governments and civil society is emphasized.

In autumn 2016 the Prime Minister’s Office set up a steering group for Baltic Sea and integrated maritime policy to perform the task to update Government’s report to Parliament Challenges of the Baltic Sea and on Baltic Sea Policy (2009). The steering group decided to update the report as the Government Resolution on Finland’s Strategy for the Baltic Sea Region similarly to the Finland’s Strategy for the Arctic Region (2013). In the preparation of this strategy priorities were selected with due consideration given to the views expressed in the written opinions issued by stakeholders and at an event organised by the Finnish Delegation to the Baltic Sea Parliamentary Conference.