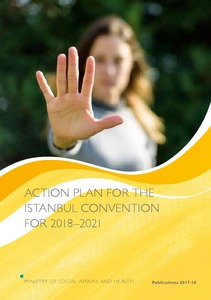 Publications of the Ministry of Social Affairs and Health 2017:18
Näytä kaikki kuvailutiedot
Tweet

The Council of Europe Convention on preventing and combating violence against women and domestic violence (Finnish Treaty Series 53/2015, hereinafter referred to as the Istanbul Convention or the Convention) entered into force in Finland on 1 August 2015. The Istanbul Convention covers all forms of violence against women. The Convention encourages the Parties to apply the Convention to all victims of domestic violence, paying particular attention to women and girls as victims of gender-based violence. In Finland, the Convention is also applicable to men and boys experiencing domestic violence. The Istanbul Convention focuses on the prevention of violence, but it also contains plenty of obligations on protecting and helping victims of violence and on bringing perpetrators to justice. Furthermore, the Convention requires the Parties to coordinate its implementation, which is the aim of this Action plan. The Action plan contains a total of 46 measures for different administrative branches. The implementation of the measures will mostly start in 2018, with NGOs involved in the implementation of several Articles. The Action plan is drawn up for a four-year period, but the Committee for Combating Violence against Women and Domestic Violence will monitor its progress on an annual basis, supplementing it as required