Sport and Equality; An overview of the current status of gender equality in sports and physical activity 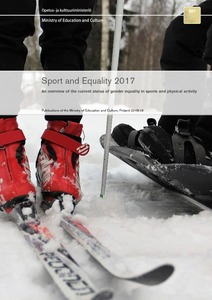 Publications of the Ministry of Education and Culture, Finland 2018:19
This publication is copyrighted. You may download, display and print it for Your own personal use. Commercial use is prohibited.
Näytä kaikki kuvailutiedot

This report is a continuation for an earlier document titled ‘Sport and Equality 2011’. The report discusses topical themes related to sports and physical activity from the gender equality perspective, relates the latest research findings by gender, and compares key data to the situation six years ago. Its key viewpoints include physical activity as well as decision-making and management. The report’s structure and contents serve the strategic steering of sports and sport services based on the principle of guidance by information as well as continuous impact assessment.

Objective measurements have provided more information and more accurate data on differences in physical activity between the genders. Boys take more exercise and exercise more intensively than girls. While this difference can already be observed in the early childhood education and care age, it is the greatest in lower primary school and becomes less prominent in teenage years. Men take more brisk or strenuous exercise than women, whereas women accumulate more hours of light physical activity.

The number of women in managerial and decision-making roles as well as in the networks and working groups of the sports sector has increased in this decade. Of leading office holders in the municipal sports and exercise sector, 45% are women. Women account for 32% of board members, 16% of chairpersons and 34% of executive directors in sports organisations. However, there are major differences in the gender distribution between various sports organisations. In recent years, women in coaching and management roles have been supported by several mentoring and training projects as well as through networking and awards.

The report’s findings indicate that gender equality and the knowledge base related to it have improved in the sports and sport sector in recent years. Data itemised by gender will also be needed in the future to support decision-making on sports policy and creating preconditions for exercise. Data collection should be continued regularly and systematically. It should also be expanded to new areas, including the allocation of bookings in sports facilities and other resources. The collection and systematic utilisation of data may help to identify the needs of the two genders, monitor changes and target separate measures at women and men, or girls and boys, as necessary