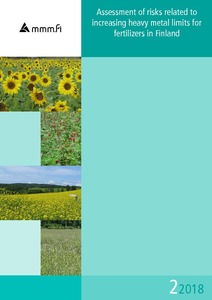 Publications of the Ministry of Agriculture and Forestry 2018:2
Näytä kaikki kuvailutiedot
Tweet

Higher limits of metals than currently allowed in Finland are suggested in the proposal for EU regulations. In this report, the effects of increased load of Cd, Hg, Ni, Pb, Cr and As into agricultural soils of Finland are assessed. Mass balance calculations for 100-year scenarios of metal inputs were performed to spring wheat rotation. Cd balances were also calculated for grassland, potato and carrot. Concentration in soil water, annual leaching and erosion, concentration and annual uptake in yield, soil concentration and annual balance are reported. In addition, the effect of increased cereal metal concentrations on the total dietary exposure of Finnish children was calculated. In 100-year time scale, the current metal inputs would lead to a negative (As, Cr and Ni) or at most slightly positive balance (Cd, Pb, Hg), whereas the current maximum level and that of the EU proposal generate positive balances. The inputs allowed in the EU proposal would lead to the following increases in environmental loading and metal concentrations in crops from the level of current realization: As over 13 %, Cr 2 %, Pb 30 %, Hg 64 %, Ni 5.5% and Cd 17–44 % depending on the crop rotation. The increase in total dietary exposure of 3-year-old Finnish children at the age group median level would be 2–5 % for As, 12–13 % for Cd, 9 % for Pb and at least 2 % for Hg. The Finnish environment is vulnerable to metal pollution and any increase in the environmental loading would be negative. Particularly for Cd there is no margin of safety. For the Finnish population, the dietary increases would be harmful as for As, Cd, Ni and Pb even the current exposure levels should be reduced