Common or own goals : Reforming the financing of the European Union 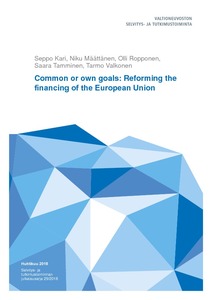 Publications of the Government's analysis, assessment and research activities 29/2018
This publication is copyrighted. You may download, display and print it for Your own personal use. Commercial use is prohibited.
Näytä kaikki kuvailutiedot

The report for the Design for Government project published in June 2015 proposed a new, quick-toimplement model for including experiments and behavioural approaches into Finnish policy design. The use of behavioural approaches as part of governmental steering has been shown to make policy more user-orientated, targeted and efficient. The project was inspired by international examples, including experiments such as the one from the UK where tweaked tax return notices resulted in millions of pounds of savings in three short weeks (Hallsworth et al., 2014), or the scheme that personalised text message reminders on unpaid fines, which was estimated to benefit the UK government by over 800,000 pounds worth of additional payments each week (Haynes et al., 2013). Chapter 3 has now been translated into English for a broader audience and use. Originally this chapter advised that the Finnish government should incorporate a two-year behavioural knowledge based experimentation system into its government plan this parliamentary term. In practice, this meant that while planning its policy, the government should evaluate its decisions based on knowledge about human behaviour. This addition would help make Finnish government both more open and effective in its operations.