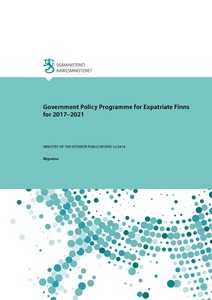 Ministry of the Interior Publications 12/2018
This publication is copyrighted. You may download, display and print it for Your own personal use. Commercial use is prohibited.
Näytä kaikki kuvailutiedot

Expatriate Finnish citizens number roughly 300,000. In April 2015, 242,096 of them were entitled to vote. It is likely that every Finn has a family member, friend or acquaintance living abroad. By this calculation, the number of expatriate Finns exceeds 1.6 million.

Expatriate Finns provide a multi-dimensional resource for Finland. They raise awareness of Finland abroad. The active and effective network of expatriate Finns nourishes Finland’s commercial, cultural and political life. Those who return home bring back knowledge and skills they learnt abroad. Returning migrants account for a considerable share of total immigration into Finland. The immigration, partly labour-based, and integration of returning migrants does not usually involve major problems.

The policy programme for expatriate Finns supports Finland’s overall immigration strategy, in which the emphasis is on immigration, employment and integration. The preparation of the policy programme was coordinated by the Ministry of Interior. Five other ministries (Ministry of Education and Culture, Ministry of Justice, Ministry of Social Affairs and Health, Ministry of Economic Affairs and Employment and Ministry for Foreign Affairs), as well as the Finland Society and the Finnish Expatriate Parliament, were consulted in the preparation of the programme. The 17 policy lines in the programme and the measures allocated to each policy line reinforce Finnish expatriation policy and make it more concrete.