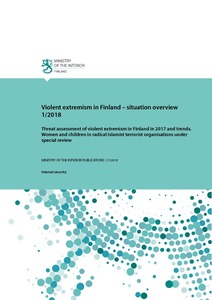 Ministry of the Interior Publications 17/2018
This publication is copyrighted. You may download, display and print it for Your own personal use. Commercial use is prohibited.
Näytä kaikki kuvailutiedot
Tweet

Since 2013, the Ministry of the Interior has regularly published situation overviews of violent extremism. Overviews are drafted under the direction of the Ministry of the Interior, together with key experts. They are meant to provide an overall picture of violent extremist movements and related crimes and trends during a given time period in Finland.

This overview presents the national definitions of violent radicalisation and extremism along with related crimes. These definitions are integral to the content of the report. The summary describes trends in the number of crimes suspected to be extremist in nature based on information from the police information systems as well as trends in the number of hate crimes committed, to the extent that these are relevant to this report.

The overview presents the actions of violent extremist groups in Finland in 2017 and addresses the situation and status of women and children in radical Islamist terrorist organisations. Daesh is the first radical Islamist terrorist organisation that has managed to attract a large number of women to travel to the region controlled by the organisation. Some women brought children along with them. There are also other children living in this region who were born into families after they left Europe. Although all the children are victims, some of them may also pose a security threat.