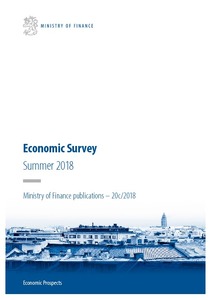 Ministry of Finance publications 20c/2018
This publication is copyrighted. You may download, display and print it for Your own personal use. Commercial use is prohibited.
Näytä kaikki kuvailutiedot
Tweet

The strong growth of the Finnish economy will continue in 2018, after which economic growth will slow to below 2%. In the next few years, the economy will be supported by both foreign trade and domestic demand. Growth in exports will level off in line with trends in world trade, and economic growth will no longer be supported by net exports as strongly as before. Household demand will be limited by slower growth in real disposable income. Finland’s GDP will grow by 2.9% in 2018. Strongly sustained economic growth and increased demand for labour will increase the number of employed in 2018 by 1.9% compared with the previous year, and the employment rate will rise to 71.2%.

In 2019, GDP growth will slow to 1.8%, while investment growth is projected to slow significantly. This is due, in particular, to a decline in the number of start-ups for new construction projects. In addition, investment decisions for major forest industry projects have been moved forward. Finland’s GDP will grow by 1.7% in 2020.

The reasonably rapid continuing growth in GDP and the moderate development of real wages will maintain demand for labour in the forecast period. Due to the large number of unemployed and hidden unemployed as well as measures to increase the supply of labour, labour supply will not yet constrain growth in employment and production at the level of the whole economy. In individual sectors, a shortage of skilled labour may already become a barrier to growth. The number of people in employment will grow by nearly 1% per year in 2019–2020. The employment rate will rise to 72.6% in 2020.