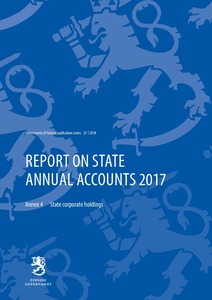 Finnish government publication series 23/2018
This publication is copyrighted. You may download, display and print it for Your own personal use. Commercial use is prohibited.
Näytä kaikki kuvailutiedot
Tweet

As provided in section 46 of the Constitution, the Government submits to Parliament a report on the State annual accounts and information on the management of government finances and compliance with the budget including measures taken by the Government in response to the resolutions passed by Parliament.

The 2017 report on the State annual accounts issued by the Government consists of five sections, the actual report and four annexes: