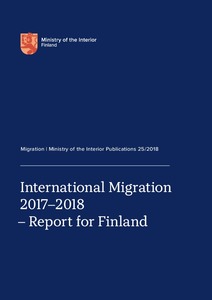 Ministry of the Interior Publications 25/2018
This publication is copyrighted. You may download, display and print it for Your own personal use. Commercial use is prohibited.
Näytä kaikki kuvailutiedot
Tweet

Commissioned by the OECD, a national report by Finland covering 2017 and early 2018 provides a concise summary of Finland’s policies regarding migration, key legal amendments, an extensive media review and up-to-date statistics. The report is largely based on OECD Guidelines. The international mobility of retirees is the special focus of the report this year.

During the reporting period, many new developments took place in migration policy. For example, the role of the Finnish Immigration Service was strengthened. Asylum processes were developed, inter alia, by mak-ing voluntary return more attractive. Also, a particular focus was put on labour migration and integration of immigrants. According to statistics, the immigrant population has increased steady.

Migration was a theme that came up often in the media. In domestic news, the most common topic was the realisation of asylum seekers’ rights.