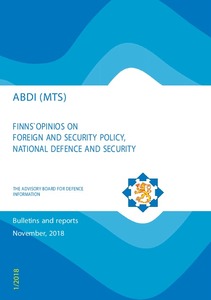 ABDI Bulletins and reports 1/2018
This publication is copyrighted. You may download, display and print it for Your own personal use. Commercial use is prohibited.
Näytä kaikki kuvailutiedot
Tweet

A survey commissioned by the Advisory Board for Defence Information (ABDI) explored the opinions of Finnish people on Finnish foreign and security policy as well as defence policy. The survey also included questions on factors affecting safety and citizens’ sense of security, developments over the next five years and factors giving rise to concern. This year’s survey also included a new question about the export of defence materiel. The survey consisted of 18 questions in total, one of which was asked for the first time. Commissioned by the ABDI, the survey was carried out by market research company Taloustutkimus Oy. The study was conducted as a part of omnibus research in the form of personal interviews. Interviews were carried out with a total of 1,034 individuals. The majority of interviews were conducted at the interviewees’ homes, while 313 individuals were interviewed in reception halls. The target group of the study comprised the entire population between the ages of 15 and 79, with the exception of the Åland Islands. The sample was formed by quota sampling in which the target group’s quotas were the distribution of age, gender, province and municipality. The interviews were conducted in 89 localities, 54 of which were cities and the remaining 35 other municipality types. The sample was weighted to match the target group. The weighted N values correspond to the population aged 15 to 79 in thousands (SVT 31 December 2017).