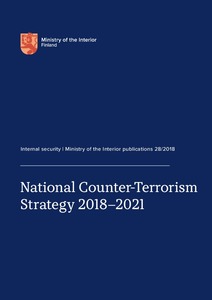 The changing operating environment and the constantly growing threat of terrorism impose new demands on counter-terrorism. This National Counter-Terrorism Strategy provides actions for responding to those demands. Combating terrorism and violent radicalisation through international security and development cooperation safeguards Finland’s national interests and promotes the security of Finland and its population. Prevention of terrorism means addressing the underlying causes of terrorism. Efforts are made to combat and detect terrorist offences as early as possible and to prepare for terrorist incidents. Communications by public authorities support counter-terrorism by preventing harm and dissemination of false information and by treating all population groups equally. The National Counter-Terrorism Strategy sets strategic counter-terrorism objectives, policies and actions. The objectives guide Finland’s activities at national and international level. The strategic policies emphasise the active involvement of all actors in the prevention, detection and combatting of terrorism and in incident management. The strategic actions aim to increase the effectiveness of Finland’s national and international counter-terrorism efforts. The Ministry of the Interior will monitor the implementation of the National Counter-Terrorism Strategy and prepare an interim report on the Strategy in 2020.