Development of tobacco and nicotine policy. Proposals for action by the working group 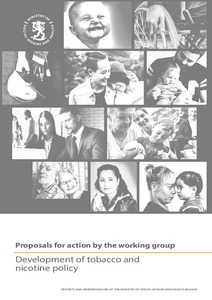 On 29 June 2017, the Ministry of Social Affairs and Health appointed a working group tasked with submitting proposals for amendments of law and other actions to support and promote the objective of Finland´s Tobacco Act which is to end the use of tobacco and other nicotine-containing products by 2030. In order to achieve the objective of the Tobacco Act, the systematic and purposeful actions must be continued and developed, and new actions adopted. Achieving the objective requires that the working group’s proposals will be implemented starting from the beginning of the next government term. The actions proposed in the report create preconditions to end the use of tobacco and other nicotine products. However, to achieve the aim, further actions must be carried out every few years. The working group proposes that each government until 2030 investigates and assesses the realisation of the objective of the Tobacco Act and propose necessary further actions. The working group underlines that the implementation of such new proposals must always be included in the subsequent government programme. The proposals of the working group are focused on taxation, prevention of young people starting smoking, smoke-free environments, smoking cessation, communication, marketing, new nicotine products, improving the effectiveness of enforcement, monitoring systems and other necessary methods. When drafting the proposals, the working group has taken into account the reduction of socioeconomic disparities.