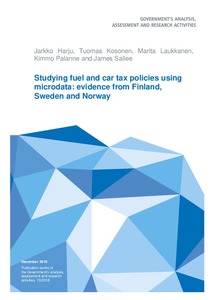 Publications of the Government's analysis, assessment and research activities 70/2018
This publication is copyrighted. You may download, display and print it for Your own personal use. Commercial use is prohibited.
Näytä kaikki kuvailutiedot

This report examines fuel and car tax policies using microdata for Finland, Sweden and Norway. In terms of fuel taxes, we analyze the degree of heterogeneity in diesel tax pass-through in Finland and the distributional consequences of the 2012 fuel tax reform. In terms of car taxes, we examine the effects of changes in car taxes on the new car fleet and the CO2 emission intensity of the car fleet. The results suggest that the pass-through of the diesel tax increase was heterogeneous and regressive, with a 15 to 20 percentage point difference in the estimated pass-through rates in the lowest and highest income and wealth groups. Similar divergence in pass-through was found with respect to population density and between rural and urban areas, with lower pass-through in more densely populated and more urban areas. Overall the estimated pass-through rates fall short of full pass-through. For the highest income and wealth and population density groups and most urban areas with estimated values are on the order of 60 percent, for the lowest groups slightly below 80 percent. The results on car taxes are the first, preliminary results of an extensive research agenda and definite conclusions on the effectiveness of the policy measures call for more work. The preliminary results point to clear anticipatory responses in the number of cars relative to car tax changes as well as some longer term impacts on the number of newly registered cars, especially after the 2003 and 2012 reforms. Relative to Swedes and Norwegians, Finns were found to drive older, lower quality cars, but the 2003 car tax reform helped somewhat reduce the gap. A similar but smaller in magnitude pattern was observed for other car tax reforms. The CO2 emission intensity of newly registered cars does seem to respond to car tax rates, although the changes are not large. The share of diesel cars also seemed to increase sharply in all the three countries after the introduction of CO2-based taxes. Exits from the car fleet on the other hand do not seem not to respond much to car tax rates.