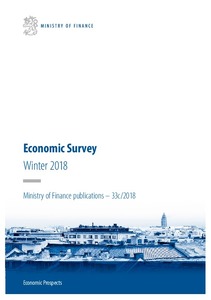 Ministry of Finance publications 33c/2018
This publication is copyrighted. You may download, display and print it for Your own personal use. Commercial use is prohibited.
Näytä kaikki kuvailutiedot
Tweet

Finland's total economic output has increased in a broad range of sectors this year, but the growth has been slower than in 2017. The GDP will grow by 2.5% in 2018. Because of strong economic growth and higher demand for labour, the employment rate will be 2.5% higher than in 2017, climbing to 71.6%.

In 2019, GDP growth will slow down to 1.5%. As more trade barriers are set up, world trade will grow more slowly, which will put the brakes on export growth and investment expectations. A marked slowdown in investment growth is expected in 2019, mainly as a result of a fall in construction investments. Finland’s economic growth will slow down further in 2020, to 1.3%, after which the growth rate will fall to below one per cent in the medium term.

Driven by a more rapid rise in earnings, growth in household disposable income will continue. Even though the inflation is accelerating, there will be a substantial growth in real income and household spending will increase next year, compared with 2018.

Despite a slowdown in economic growth, moderate growth in real earnings will maintain demand for labour force. Because of the fairly high number of unemployed and concealed unemployed, and the measures increasing the supply of labour, the supply of labour will not yet restrict the growth of employment and the economy as a whole, even though there is a shortage of skilled labour in a number of sectors.

Because of steady economic growth and measures curbing spending increases, Finland will achieve near-balance in its public finances. The general government debt to GDP ratio will also fall in the next few years. A weakening of public finances is expected in the early 2020s, however, as economic growth is slowing down and the adjustment measures are coming to an end. Ageing of the population is weakening Finland's public finances by increasing pension, health and care expenditure.