Survey on the Protection of Audiovisual Performances in the Beijing Treaty, in the Legislations of the European Union, and Certain Member States of the EU and EEA 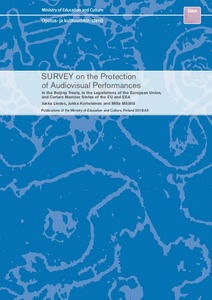 OKM 2018 43 SURVEY on the Protection of Audiovisual Performances.pdf (1.496Mt)
Lataukset:

Publications of the Ministry of Education and Culture, Finland 2018:43
This publication is copyrighted. You may download, display and print it for Your own personal use. Commercial use is prohibited.
Näytä kaikki kuvailutiedot

The Ministry of Education and Culture gave in November 2013 the Finnish Copyright Society to undertake a set of studies for the development of copyright policy and legislation. This survey is part of this cooperation contract. The main part of the work was done in 2016.

The survey provides an overview of the (related rights) protection of performing artists (actors, dancers, musicians) in the context of audiovisual productions, in cinematographic films and television.

National copyright acts have been examined on the basis of the English translations, and when possible also on the basis of the original language versions of the acts. The authors have observed that the availability and being up-to-date, as well accuracy, of the national legislations and their translations varies considerably. The search and scrutiny of the texts increased the amount of work.

This overview does not include any analysis of the history, application or details of the provisions, but a mere identification of the protective elements in the target texts, which is based on a prima facie interpretation of the provisions. The survey could act as a basis for a separate and deeper analytic study.

The survey contains a short synthetic commentary on its subject matter, and a short analysis on the differences between the scope of protection in Denmark, Norway and Sweden, and in Finland.