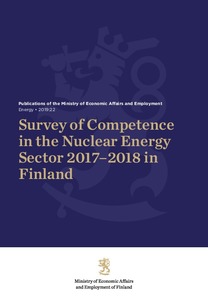 Publications of the Ministry of Economic Affairs and Employment 2019:22
This publication is copyrighted. You may download, display and print it for Your own personal use. Commercial use is prohibited.
Näytä kaikki kuvailutiedot

The results are based on information provided by organisations in the nuclear energy sector in a survey. Due to the survey method, the results should be comparable with those given in the OTR2010 report. All key industry players responded to the survey. Industrial enterprises provided fewer responses than expected; therefore the survey was not entirely comprehensive. The OTR2010 survey was not comprehensive where companies were concerned.

According to the survey, the number of experts was 3,807; an increase of 16% from 2010 (3,285). The number of persons with a Master’s degree was 1,895 (50%), with a Bachelor’s degree 1,232 (32%), and with a secondary education qualification 680 (18%). The distribution by years of experience has changed from the previous bimodal pattern (OTR2010), now concentrating around younger experts.The number of experts reported was slightly higher (+2%) than what was the estimate for 2015 in 2010. The estimates in the present survey for need in the near future were clearly smaller than in the previous report for 2020 (-16%) and 2025 (-14%). In terms of the results, the most significant change in the operating environment compared the situation forecast in 2010 is the suspension of the Olkiluoto 4 project.

The demand for personnel in 2030 is estimated to be 5% higher than in 2017. The need is estimated to decrease in the near future (3,672 in 2020) and then return on a growth track (3,981 in 2030). The current number of personnel with a Bachelor’s degree or a secondary qualification is expected to be sufficient, whereasthe number of Master’s degree-holders should increase by 10% on the current level.

According to the results of this survey, and based on development seen in previous years, it is to be expected that sufficient personnel will be available in Finland in the future. However, in certain competence areas special attention should be paid to the training and induction of junior experts.