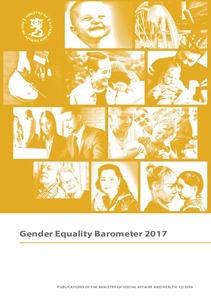 Publications of the Ministry of Social Affairs and Health 12/2018
This publication is copyrighted. You may download, display and print it for Your own personal use. Commercial use is prohibited.
Näytä kaikki kuvailutiedot
Tweet

The sixth Gender Equality Barometer provides information on opinions, attitudes and experiences related to gender equality in various areas of life. The barometer enables monitoring the development of gender equality in different sectors of Finnish society.

A slow change has taken place in attitudes towards gender equality over the past 20 years. Women and men are believed to be a bit more equal with one another than previously. Men felt more often than women that gender equality has already been achieved. The majority of women, in turn, felt that men are in a more privileged position in society compared to women.

The barometer’s results indicate that there are also other problems with equality. Especially women continue to face sexual harassment and inappropriate behaviour. Sexual harassment affects particularly women under the age of 35. Women experience gender-related disadvantages in working life more often than men, for example concerning wages. Especially people working in private sector workplaces assessed that taking family leaves is more difficult for men than women. Approximately one third of wage earners assessed that gender minorities would experience discrimination in their workplace. One third of students felt that study materials contained gender stereotypes.

In families with two partners, the responsibility for household work continues to be divided traditionally, which causes conflicts. Women felt far more often than men that they held too great a share of responsibility for household work. Households, more often than not, split the cost for shared expenses in half, even though the man’s income was estimated larger than the woman’s.