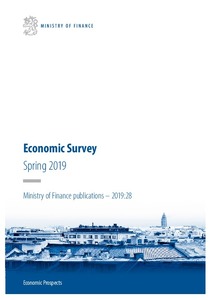 Publications of the Ministry of Finance 2019:28
This publication is copyrighted. You may download, display and print it for Your own personal use. Commercial use is prohibited.
Näytä kaikki kuvailutiedot
Tweet

In 2019, economic growth in Finland will slow down substantially after an upturn and the annual growth rate will be less than 1.5% in the coming years. In the medium term, between 2022 and 2023, the rate of growth will fall below one per cent.

Finland’s GDP is expected to grow by 1.7% in 2019. Growth will be sustained by domestic demand. Private consumption will continue to grow robustly. A higher employment rate and accelerating growth in earnings will sustain the growth of disposable income. Private investments will grow only slowly. There will be a particularly sharp fall in housing construction. World trade will grow more slowly in the outlook period, which will also slow down the growth of Finnish exports.

With a slowdown in economic growth and a rise in nominal wages, there will be a gradual weakening in the demand for labour force in 2020 and 2021. A situation where unemployment is falling to the levels experienced during the cyclical peak before the financial crisis will tighten the labour market, which in turn will create more pressures for wage increases and create labour bottlenecks in the Finnish economy.

As a whole, inflationary pressures are expected to grow only slowly in the later years of the outlook period. The rise in earnings is expected to gradually have a broader impact on prices and consumer demand will grow steadily. Raw material prices will increase only moderately, however.