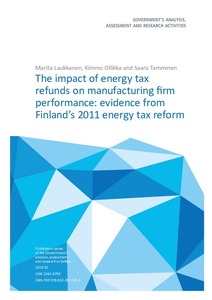 Publications of the Government´s analysis, assessment and research activities 2019:32
This publication is copyrighted. You may download, display and print it for Your own personal use. Commercial use is prohibited.
Näytä kaikki kuvailutiedot
Tweet

Finland’s 2011 energy tax reform increased excise taxes on energy. The tax increase raised concerns about competitiveness of the manufacturing sector, and in the beginning of 2012 a pre-existing tax exemption to manufacturing was extended to a larger set of firms. The extension increased the number of firms eligible for energy tax refunds from about ten to over 140. At the same time, the tax refunds increased from just under EUR 10 million to over EUR 200 million.

This study evaluates the effects of the energy tax refunds on the economic and environmental performance of the manufacturing firms that became tax exempt in 2011-2012. We compare detailed information on the newly exempt and non-exempt plants’ economic outcomes and energy use to estimate the impact of the energy tax exemption on plants’ economic performance and energy efficiency.

In the period 2012-2016 the refunds were on average 1 percent of the total expenses of the firms that have been refund recipients since 2011-2012. Comparison of exempt and non-exempt plants’ energy intensities, if measured by the ratio of electricity use to total expenses, suggests that the energy tax refund does not sort out particularly energy intensive manufacturing. That is, plants can have similar energy intensities but receive different tax treatment.

The results on the impact of the energy tax refund on the economic performance of manufacturing plants are most compatible with no important effect on revenue, value added, wages, employees or total energy use, and a negative impact on gross output and energy efficiency.

This publication is part of the Government Plan for Analysis, Assessment and Research (tietokayttoon.fi). The content is the responsibility of the authors and does not necessarily represent the views of the Government.