Suitability of habitat types for biodiversity offsetting in Finland 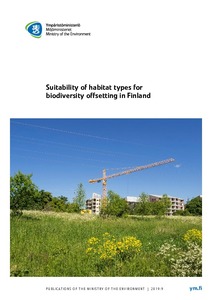 Publications of the Ministry of Environment 2019:9
This publication is copyrighted. You may download, display and print it for Your own personal use. Commercial use is prohibited.
Näytä kaikki kuvailutiedot
Tweet

According to the assessment of habitat types, the conditions for biodiversity offsetting in Finland are quite good when the general and specific preconditions are taken into consideration. Slightly more than 41 per cent of the assessed habitat types were deemed suitable for biodiversity offsetting, while only 10 per cent of the habitat type groups were found to be entirely unsuitable from the perspective of both deterioration and compensation.