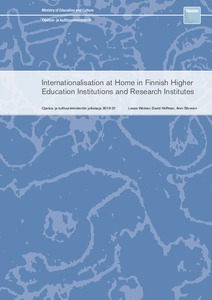 Publications of the Ministry of Education and Culture, Finland 2019:21
This publication is copyrighted. You may download, display and print it for Your own personal use. Commercial use is prohibited.
Näytä kaikki kuvailutiedot

This study on the current status of internationalisation at home was carried out for the Ministry of Education and Culture by the Finnish Institute for Educational Research, which is based at the University of Jyväskylä. The study was commissioned using the streamlined procedure for small-scale public procurement. The purpose of the study was to investigate how much attention had been paid to internationalisation at home in institutions of higher education and research and to ways in which related practices had been implemented. The research data was collected via an online questionnaire and interviews conducted at various institutions.

On the basis of the data, there are clear differences within and between higher education institutions in terms of familiarity with the concept of internationalisation at home and the importance assigned to it, the extent to which equality had been achieved in student participation, and the roles of international staff and students. The researchers identified a number of promising practices as well as some challenges to language policy.

Integrating internationalisation at home with established strategies and procedures calls for a holistic approach that covers everything from the national level to that of the individual student. The report sets out recommendations for action to be taken at various levels (nationwide, in institutions of higher education, in faculties and departments, in teaching and administration, and among students). These include the following:

- including indicators of internationalisation at home in agreements on performance targets;

- promoting internationalisation at home, cross-cultural competence and language skills among teachers and administrators;