Enabling growth, learning and inclusion for all 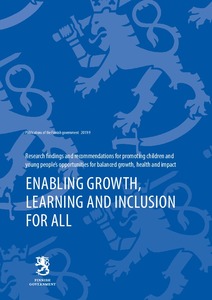 Publications of the Finnish Government 2019:9
This publication is copyrighted. You may download, display and print it for Your own personal use. Commercial use is prohibited.
Näytä kaikki kuvailutiedot

In early 2016, the Ministry of Education and Culture and the Ministry of Social Affairs and Health launched the preparations for a Strategy for Children. A summary of findings from studies on children and young people was drawn up to support the preparatory work. The summary presents the key findings brought up by individual researchers and research groups, and a set of recommendations based on them. Some hundred written opinions were received, representing the findings of more than 200 researchers.

This report is based on an analysis of the researchers’ original content which has been grouped into five themes. The researchers’ original texts have been followed as closely as possible. In some cases, similar findings from several researchers have been combined and readability has been improved by editing the wordings and adding sentences to link paragraphs. Each paragraph ends with a link to the individual’s or group’s original text, and a list of the originals is provided at the end of the report. The original texts are available online at lapsistrategia.fi.

The five themes are human relations, learning, safety, health and inclusion. Research findings on birth rate form a cross-cutting theme. Each theme consist of four to seven sub-themes. Researchers’ conclusions and recommendations for measures are separated from the presentation of the findings and provided under the report’s conclusions.