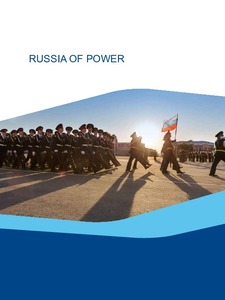 Ministry of Defence
This publication is copyrighted. You may download, display and print it for Your own personal use. Commercial use is prohibited.
Näytä kaikki kuvailutiedot

The report A Russia of Power examines the current state of Russia, as well as its future, from the perspective of security.

The goal of the report is to increase awareness of security and understanding of Russia. It was also deemed important to develop more research expertise in the field and research cooperation. Students and young researchers contributed, which gave them valuable experience. An additional benefit was that researchers and authorities were able to combine their expertise; this cooperation will be developed more systematically in the future.

The report focuses on three main themes: Russian foreign policy, its military defence and the resources of the country’s defence industry, and Russia’s internal development. Preparing the report took a year, during which over 40 experts from universities, research institutes and various authorities participated in the work of the three thematic groups.

Their task was to evaluate the country’s current status, as well as factors that could contribute to change or continuity. In addition to evaluating impacts on Russia’s stability and relations between Finland and Russia, the report also examined security from the perspectives of Finland, the neighbouring areas and the international community more broadly. The project also involved foresight analysis of the future of Russia.

The report collates the work of the experts who participated in the project; each thematic group was given a task and was responsible for producing their own section of the report. Therefore, the views expressed in the report are those of the authors and experts, and they do not represent the views of the Finnish government.