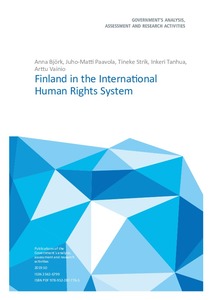 Publications of the Government´s analysis, assessment and research activities 2019:50
This publication is copyrighted. You may download, display and print it for Your own personal use. Commercial use is prohibited.
Näytä kaikki kuvailutiedot
Tweet

This report summarises implications of the current operational environment for the international human rights system since the Government of Finland human rights report in 2014. The project focused particularly on four global trends (environmental change, migration, new technologies and the changing security paradigm). The project also assessed political power shifts and movements influencing the international human rights system and its actors. The scope of the study included the United Nations and its human rights council and the European Union.

Since the operational context for the ruling world order has changed because of global trends and political power shifts, it is necessary to critically evaluate the potential of the international human rights system to adapt to this change. The current political climate emphasises state sovereignty over multilateralism, and the growing multipolarity and multivocality make it more difficult to reach agreements on international forums. Civil society actors are facing a reduction of operating space, and the role of business actors is on the rise. The strong anti-gender movements and the opposition to gender equality are causing distress in international forums. New ways to communicate the importance of human rights are being searched by various actors.

The findings of the project include several promising lines of development for updating the international human rights framework to tackle the challenge of global trends. As are result of these findings, the report formulates eight goals Finland should strive for when shaping its human rights policies in the future. Each goal includes recommendations on how to advance them both internationally and domestically.