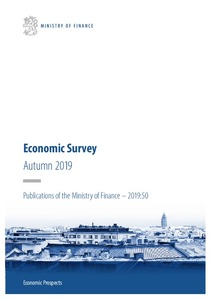 Publications of the Ministry of Finance 2019:50
This publication is copyrighted. You may download, display and print it for Your own personal use. Commercial use is prohibited.
Näytä kaikki kuvailutiedot

The short-term outlook for the Finnish economy remains positive despite worrying economic news received from elsewhere in the world. Economic growth will be sustained by domestic demand over the coming years. Growth of private investments and consumption will slow down as the uncertainties in the external environment are reflected in the expectations of Finnish companies and consumers. Public consumption and investments will contribute markedly to GDP growth, especially in 2020.
General government expenditure has remained higher than general government revenue throughout the current economic upturn. Finland’s general government finances suffer from a structural deficit, which is expected to grow over the next few years. General government finances will be weakened by a slowdown in economic growth, higher expenditure resulting from an ageing population and the spending increases envisaged in the Government Programme.
Finland’s GDP will grow by 1.5% in 2019. Exports will grow only slowly as the outlook for European economies remains uncertain. Housing construction will decrease and with the global economy slowing down, a slowdown in production investments is also expected. Boosted by rising earnings and a high employment rate, private consumption will continue to grow.
Finland’s GDP will grow by 1.0% in 2020 and by 0.9% in 2021. Growth in private consumption will slow down as the household savings rate rises. Investments to GDP ratio will decrease. The trade tensions between major economies will have an impact on world trade and indirectly also on Finnish exports.
A slowdown in economic growth and a rise in nominal wages will gradually weaken employment growth. Further decline in the working-age population will push the employment rate to 73.4% by 2021. Unemployment will fall slowly and will stand at 6.2% in 2021.