Effects of population changes in the labour market: an analysis of six European countries 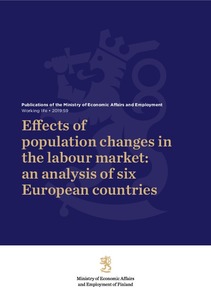 Publications of the Ministry of Economic Affairs and Employment 2019:59
This publication is copyrighted. You may download, display and print it for Your own personal use. Commercial use is prohibited.
Näytä kaikki kuvailutiedot
Tweet

The publication examines the labour market effects of demographic changes in six European countries: Germany, the Netherlands, Sweden, Latvia, Estonia and Finland. In all these countries, the ageing of population is weakening the old-age dependency ratio. In other words the proportion of those aged 65 or over to the working age population is growing. Fertility is not sufficient to ensure population increase in any of these six countries. This means immigration plays a major role in all countries. As the number of the working age population falls, employment rates tend to rise. This has happened in all countries in recent years, along with a decrease in unemployment rates. Labour productivity has not decreased in any of these countries; in some, it has actually increased.

Most recently, the old-age dependency ratio has remained largely unchanged in Germany and Sweden, while in other countries in has continued to decline. The development of fertility shows more variation. Germany and Latvia have recently succeeded in increasing fertility. With regard to immigration, Latvia differs from the other countries in that its net immigration is negative, although the situation is stabilising. Net immigration has increased lately in Estonia, Latvia (although the level remains negative), the Netherlands and Sweden. Eurostat’s population scenarios indicate the significant impact of migration on demographic development by 2035. It seems that immigration could reverse the otherwise declining population trend in the Netherlands and Sweden, and to keep it almost unchanged in Finland. In the other three countries, population scenarios show a downward trend.

Policy responses are quite similar in all countries examined. They focus on pension systems, access to employment to those with weak labour market participation, labour market policy, competence development, family-friendly solutions, and immigration policy. The publication is based on the work of the international labour market forecasting network (ILMFN).