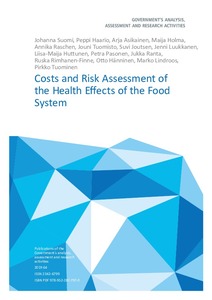 Publications of the Government´s analysis, assessment and research activities 2019:64
This publication is copyrighted. You may download, display and print it for Your own personal use. Commercial use is prohibited.
Näytä kaikki kuvailutiedot
Tweet

The project Costs and Risk Assessment of the Health Effects of the Food System employed biological, chemical and nutritional examples to investigate the health and economic risks of food and nutrition in Finland and the cost effectiveness of controls. The project explored the causes and consequences of the health risks associated with food in Finland and sought appropriate risk-management measures. The onset of foodborne health hazards can be slow, and therefore even strong efforts to control them at the population level may take years or decades. Based on the project results, several proposals for action were presented, the most important of which are to: 1. deepen and broaden the risk assessment of the public health impact of the food system to compare different health risks, 2. undertake cost–benefit analyses of food control and health care and 3. to study policy instruments for change.
Food contributes significantly to the health of the population, which can be influenced by nutrition and food safety. According to the project results, the main burden of disease (BoD) was caused by the inadequate consumption of fruit and vegetables and the excessive intake of salt and saturated fats, resulting in disease burdens of 36,000, 29,000, 32,000 and 9,200 disability-adjusted life years (DALYs)/year, respectively. Reducing the intake of salt and saturated fats in particular would be a cost-effective way to reduce the BoD.
Despite the relatively high level of food hygiene achieved in Finland, up to thousands of foodborne infections occur every year, and food contaminants increase the BoD on consumers. Of the biological food hazards, Listeria caused the largest BoD, about 670 DALYs annually. Of the chemical hazards, lead caused the largest BoD, about 570 DALYs annually. Most of the control costs are borne by food businesses. Therefore, the scenarios that most affect businesses also have the greatest financial impact.