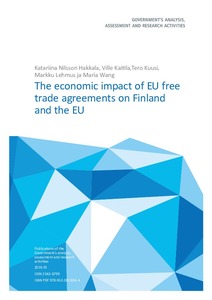 Publications of the Government's analysis, assessment and research activities 2019:70
This publication is copyrighted. You may download, display and print it for Your own personal use. Commercial use is prohibited.
Näytä kaikki kuvailutiedot

Economic policies of the European Union (EU) are based on promoting open and predictable international trade. EU Free Trade Agreements (FTA) is an important tool for achieving this objective. In this study, we analyse the impact of the EU FTAs on goods and services, value added, direct investment, employment and gross domestic product (GDP) in Finland. We focus on estimating the economic impact of the FTAs concluded during Finland's EU membership since 1995. The analysis shows that Finland's exports have increased markedly in many countries that have entered into FTAs with the EU since 1996, but the increase in exports seems to be explained by the general globalisation of trade rather than FTAs. At the aggregate level, our results suggest that the FTAs that came into force since 1988 have significantly increased EU trade with partner countries. The most comprehensive FTA has increased EU exports to partner countries by around 34% and imports by 14%. The larger average effects on EU trade are explained at least in part by the importance of the agreements concluded before Finland's membership of the EU. However, although the EU FTAs have had a weaker effect on Finland's exports than on EU countries on average, they have increased exports in some industries significantly. The industries that have benefited most from the EU FTAs are forest industry, machine and equipment manufacturing, and business services that support trade in goods. In addition, agreements have increased production in Finland through global value chains. For trade in goods, the effect of free trade agreements, concluded after 2004, on value added in Finland is estimated at around 1.6% of total value added in export sales, which is slightly below the EU average of 2.0%. We also find that the agreements have contributed positively to foreign direct investment, trade in services, employment and GDP. Our results support the use of FTAs as a tool for economic policy, but the scope and depth of the agreements and the functioning of other international institutions are crucial how large impact they have on trade. Not even the broader agreements can replace the transparency, predictability and dispute resolution mekamism provided by the World Trade Organisation, WTO. That is why the EU should strive, not only for new and comprehensive free trade agreements, but also to support the continuation of WTO reforms and to guarantee its ability to act in the future.