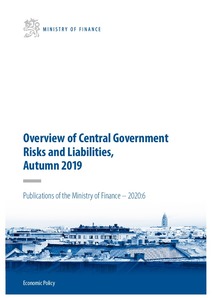 Publications of the Ministry of Finance 2020:6
This publication is copyrighted. You may download, display and print it for Your own personal use. Commercial use is prohibited.
Näytä kaikki kuvailutiedot
Tweet

In addition to direct liabilities, guarantee liabilities and collateral, central government’s risk position is influenced by implicit liabilities. They are not legally binding on central government, but due to social factors, central government is expected to bear the ultimate responsibility for them. The key implicit liabilities are those pertaining to the banking sector and local government. Finland’s banking sector involves structural factors that increase its sensitivity to disruptions. These are the banking system’s relatively large size, concentration and close links with other Nordic countries. These special features have gained strength in recent years. Local government’s implicit risks have also increased due to the growth in municipalities’ financial liabilities. At the end of 2018, municipalities’ debt was EUR 17 billion, having been EUR 5.5 billion in the early 2000s. In addition, guarantees granted by municipalities have grown significantly.

The growth in government liabilities and modest growth prospects, driven by structural factors in the form of weak productivity development and ageing population, have reduced the leeway for central government in the event of a macroeconomic disruption. Particular attention should thus be given to indebtedness and growth in contingent liabilities and their risk management. There is also a need for structural reforms that support the development of employment and productivity.