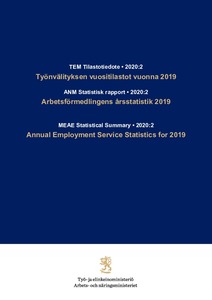 Statistical Summary -annual publications 2/2020
This publication is copyrighted. You may download, display and print it for Your own personal use. Commercial use is prohibited.
Näytä kaikki kuvailutiedot
Tweet

In 2019, the number of jobseekers registered at Employment and Economic Development Offices totalled 769,400, down 29,100 on the previous year. The number of jobseekers decreased in areas of all ELY Centres. The decrease was greatest in Pirkanmaa (-8%), Lapland (-8%), South Ostrobothnia (-6%), Southeast Finland ( 5 %) and Kainuu (-5%). When examined by occupational group, the number of jobseekers decreased from the previous year in 10 groups, the greatest decrease being in the groups of professionals (-8 %), clerical support workers ( 7 %), technicians and associate professionals (-6 %), skilled agricultural, forestry and fishery workers ( 6 %), service and sales workers (-6 %) and elementary occupations (-6 %). The average duration of a job-seeking period was 68 weeks. During 2019, a total of 874,500, job-seeking periods were completed, 41 per cent of them ending with employment in the open labour market. In 2019, the average number of jobseekers at the end of the month was 528,100, representing an decrease of 27,600 on the previous year.