Report on entering several languages in the Population Information System 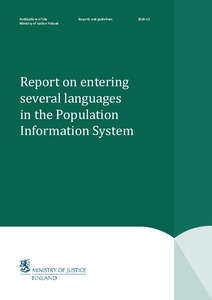 Publications of the Ministry of Justice, Reports and guidelines 2020:12
This publication is copyrighted. You may download, display and print it for Your own personal use. Commercial use is prohibited.
Näytä kaikki kuvailutiedot
Tweet

One of the key observations contained in the Report of the Government on the Application of Language Legislation 2017 is that the possibility of entering several mother tongues for a person in the Population Information System should be investigated. A recommendation issued by the Committee of Ministers of the Council of Europe to Finland also stated that the expression of multiple identity and language affiliations in the Population Information System should be facilitated.

This report assessed the benefits for the individual of entering several mother tongues in the Population Information System. They include providing a fuller picture of a person’s language identity, and avoiding situations where parents who speak different languages have to choose a language for their child. The possibility of recording several languages could additionally give a more diverse idea of the language resources in Finland.