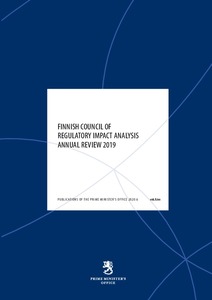 Publications of the Prime Minister’s Office 2020:6
This publication is copyrighted. You may download, display and print it for Your own personal use. Commercial use is prohibited.
Näytä kaikki kuvailutiedot

The Finnish Council of Regulatory Impact Analysis, set up in 2016, has established its position as a regular part of the law drafting process. In March 2019, the Government appointed the Council for its second term 2019–2022.

The Council has drawn particular attention to cases where economic and social impacts have not been sufficiently explained in the Government’s proposals. The Council has also commented on shortcomings in impact assessments concerning the law drafting projects of the EU. In the statements given in 2019 special emphasis was placed on human impact assessment, such as the impacts on children and on fundamental rights. In 2019 the Council also made an initiative concerning the creation of an ex post assessment system in Finland. This was included in the Government Programme, and preparations have now been started.

The Council’s role will be strengthened, as stated in Prime Minister Marin’s Government Programme. The Council has also made efforts of its own to further develop its work and enhance its impact. Based on a study of the University of Eastern Finland on the impact of the Council, completed in spring 2019, the Council has proven that it is needed for developing legislative preparation.