Infrasound Does Not Explain Symptoms Related to Wind Turbines 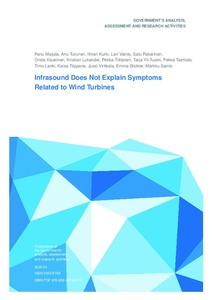 This publication is part of the implementation of the Government Plan for Analysis, Assessment and Research (tietokayttoon.fi). The content is the responsibility of the producers of the information and does not necessarily represent the view of the Government.