The State of Productivity in Finland. Why did its growth stop? Will it start again? 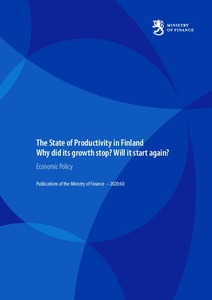 Publications of the Ministry of Finance 2020:60
This publication is copyrighted. You may download, display and print it for Your own personal use. Commercial use is prohibited.
Näytä kaikki kuvailutiedot
Tweet

Economic growth is still important source of improving living standards and, in the long term, labour productivity growth is the most important factor behind it. Productivity grows as a result of better utilisation of better technologies. In this, its first report, the Finnish Productivity Board examines the development of productivity in Finland from diverse perspectives, making use of national accounts, growth accounting and corporation-level productivity decompositions.

The financial crisis put an end to Finland's fast productivity growth, turning it into a decline. The main causes for the fall in measured productivity were the shock faced by the electronics industry and decline in the competitiveness of the Finnish national economy, which resulted in negative or weak productivity growth, even if employment stayed at quite a high level considering the poor economic cycle.

Policy actions only have an indirect and uncertain impact on productivity. In policy interventions it is better to focus on maintaining and strengthening general conditions for productivity growth.