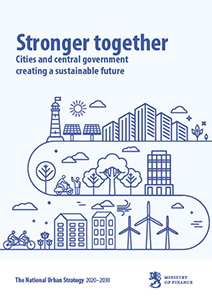 valtiovarainministeriö
This publication is copyrighted. You may download, display and print it for Your own personal use. Commercial use is prohibited.
Näytä kaikki kuvailutiedot

The National Urban Strategy 2020–2030 is a shared vision of the Government and cities on the importance of socially sustainable, climatesmart and vibrant cities. The strategy has been prepared jointly by cities and the central government.

The Urban Strategy defines the partnership between cities and the central government. It seeks to create a shared mindset and give direction to the practical work conducted in the partnership, as well as define how to strengthen the prerequisites of cities in providing the best possible living and operating environment for residents and communities. The strategy expands on the national urban policy and responds to the opportunities and challenges of urbanisation, taking into account the broad goals of the UN’s New Urban Agenda.

Drafting of the strategy begun as a co-operation between cities and the central government in late 2019. It soon became clear that the strategy process and its premises would be influenced by an unexpected factor, the Corona pandemic, whose effects on health, business and the economy were felt strongest in cities. In drafting the strategy, cities and the central government have agreed not to over-emphasise the impact of the pandemic when deciding on strategic focus areas over the span of the next decade. Despite this, the effects of the pandemic are taken into account in the description of the operating environment and the direction of strategic measures.