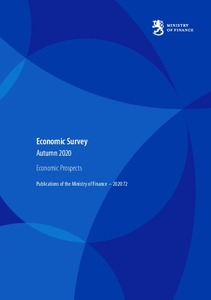 Publications of the Ministry of Finance 2020:72
This publication is copyrighted. You may download, display and print it for Your own personal use. Commercial use is prohibited.
Näytä kaikki kuvailutiedot

Finland’s gross domestic product is expected to contract by 4.5% in 2020. In addition to the exports, both private consumption and private investments will also decrease. Higher public spending will support economic growth this year. The GDP is expected to grow by 2.6% in 2021 and by 1.7% in 2022.

The economy will start picking up at the end of this year, but the recovery will be slow because of growing uncertainty and weak confidence among economic agents. Not all sectors of the economy will recover from the sudden halt experienced in the first half of the year at the same speed. Private consumption will fare best even though no rapid upturn in the demand for private services is in sight. Fall in housing construction is also slowing down the recovery of investments. Exports and industrial production have been hit by the continuation of the pandemic and growth in these sectors will only resume in 2021.

The employment rate will decrease by 2% this year and will start recovering during the second half of 2021. Unemployment will reach 8.2% next year. There will be a gradual recovery of the employment rate, but it will remain at 71.9% in 2024.