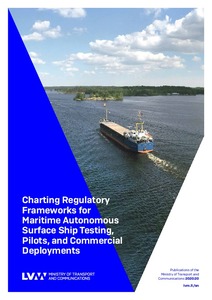 Publications of the Ministry of Transport and Communications 2020:20
This publication is copyrighted. You may download, display and print it for Your own personal use. Commercial use is prohibited.
Näytä kaikki kuvailutiedot

The report discusses how Maritime Autonomous Surface Ships (MASSs), ships capable of autono-mous and remote operations, should be regulated. It consists of an introduction and three main chapters.

Chapter 2 introduces MASS technologies, focusing on the sensors, software components, and algo-rithms needed in autonomous navigation systems. The report provides an overview of the role of machine learning models in autonomous navigation systems. These are necessary especially in automating watchkeeping duties and require testing in multiple phases of the system development cycle.

Chapter 3 discusses the existing IMO, EU, and national regulatory frameworks, in the context of MASS trials and pilot deployments in test areas in the Baltic Sea. It also considers how the rules should be changed to facilitate the trials and pilot deployment. It concludes that the current rules will allow MASS trials, provided that they are approved by the authorities. Permanent MASS deploy-ments, however, still require amendments of national and international rules.

Chapter 5 provides an executive summary of the main findings.