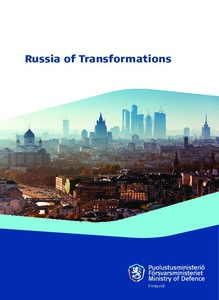 The reader is holding the second, more comprehensive study on developments in Russia commissioned by the Ministry of Defence. The first, published in 2008, focused on society and domestic politics, the economy, traffic and transport, the environment and energy, and foreign and security policy. At the time, this project represented a new approach. Extensive use was made of expertise outside the defence establishment, while reports submitted for publication were drawn up by thematic working groups, based on the preliminary research question and their own work. From the Finnish security perspective, the ‘Russia of Challenges’ publication demonstrated a clear need to gather knowledge on Russia produced, analysed and processed in a practical manner. Three editions were published. Of these, around 13,000 copies in Finnish and 2,700 in English were downloaded from the internet. Over a period of four years, developments in both Russia and the international community have once again created the need for a survey of Russia by Finnish experts and specialists in various fields.