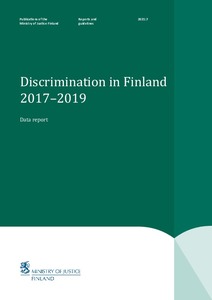 Publications of the Ministry of Justice, Reports and guidelines 2021:7
This publication is copyrighted. You may download, display and print it for Your own personal use. Commercial use is prohibited.
Näytä kaikki kuvailutiedot

Discrimination continues to be a significant problem in Finland, affecting the labour market as well as other areas of life. However, the attitudes of Finns towards minorities, persons with disabilities and older people became more tolerant in the period 2017–2019. In most cases, the attitudes are close to those most prevalent in the European Union.

Of all immigrant minority groups, those of African origin face most discrimination, and discrimination based on ethnic background and skin colour appears to be fairly common in Finland. New data have been obtained on the discrimination of the Roma population, and attitudes towards this group are rather negative in Finland compared to the EU level. In the situation of the Sámi people, signs of structural discrimination can be observed. The problems faced by persons with disabilities and older people are largely related to the availability of services and obtaining related information, and the inaccessibility of the environment. Discrimination and harassment of gender and sexual minorities are still common, even though the situation clearly improved during the period under review.

The operating data of the judicial and supervisory authorities only describe the tip of the iceberg of discrimination. While the number of cases is rather small, the content of the related decisions is significant. The inspections and statements of opinion of the Chancellor of Justice and the Parliamentary Ombudsman are also important sources of information on discrimination.

During the period under review, more discrimination data were collected than before and the quality of the data has further improved.