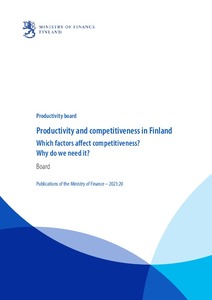 Publications of the Ministry of Finance 2021:20
Näytä kaikki kuvailutiedot

In Finland, productivity grew very rapidly during the period between the early 1990s recession and the 2008 financial crisis, but in the years following the crisis it declined more than in peer countries. In 2015–2019, productivity growth in Finland was higher than in the other ‘old’ euro-area countries. A similar trend was evident in Finland’s export success, too. Besides the trend in competitiveness, there is another notable factor that has affected Finland’s export success and productivity: the fortunes of the electronics industry. First, the industry saw rapid productivity growth, but this was later followed by a powerful negative shock.