China and the United States – A challenge to companies : Impacts of the superpower competition to Finnish companies 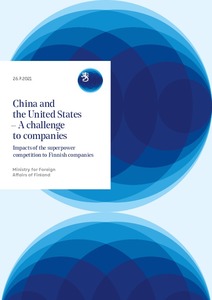 Publications of the Ministry for Foreign Affairs 2021:6
Näytä kaikki kuvailutiedot

The growing rivalry between the two superpowers of China and the United States has an impact on globally operating companies. The powers are increasingly active in using various policy instruments with the aim of strengthening their global position and achieving or maintaining a leading role in the development critical technologies. A report, prepared by specialists from the Ministry for Foreign Affairs and the Confederation of Finnish Industries EK, examines five policy instruments (sanctions, export control, international standardisation, restrictions to market access, and funding) and their impact on Finnish companies. The report is part of the work done by Team Finland to support companies’ international business operations.

The United States and China are important economic partners for Finland. The technology sector, in particular, is affected by the China–US rivalry because of the sanctions, export control and standardisation. For globally operating companies, the rivalry between the two superpowers may mean a choice between two markets or geographical differentiation of activities and limited opportunities for trading in global markets. Companies must know their clients, supply chains and financiers better than before. The situation calls for an increasingly clear understanding of the impacts of political actions on business and its risks, the maintenance of a national situation picture and exchange of information. It would be important to raise awareness of the rivalry between the superpowers especially among small and medium-sized enterprises.