Hate crimes and their handling in the criminal process 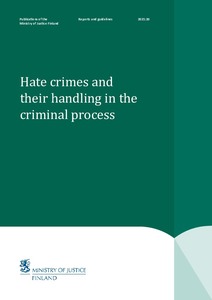 Publications of the Ministry of Justice, Reports and guidelines 2021:20
Näytä kaikki kuvailutiedot

This study investigates how hate crimes are identified at the different stages of the criminal procedure; how the suspicion of a possible hate motive is relayed from the police to the prosecutor; and how it affects the severity of the sentence. Hate crimes reported to the police in 2017 were followed up as cases progressed from pre-trial investigation to the prosecutor, ending up in district courts.

The study found shortcomings in the identification and processing of hate motives in the criminal procedure. It is proposed, among other things, that it should be compulsory to code certain reports of offences as hate crimes and that collaboration in criminal investigation should be intensified and the instructions on police interrogation updated.

The author assumes full responsibility for the content of this publication. The views presented are not necessarily representative of those of the European Commission, the funder of the Facts against Hate project, or the positions of Finland’s Ministry of Justice.