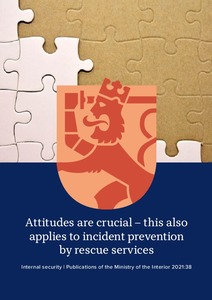 Publications of the Ministry of the Interior 2021:38
Näytä kaikki kuvailutiedot

The process to implement the Safe and Incident-free Daily Life 2025 action plan was launched in autumn 2020. With the eight impact targets at the core of the action plan, rescue services are able to tackle the phenomena key to security of citizens and society at large.

Following the preliminary survey, organisation-specific workshops were established to familiarise rescue service actors involved in incident prevention with the action plan and to jointly prepare concrete measures to bring the impact targets closer to everyday work in the organisations concerned. After the workshops, persons involved in incident prevention considered the interaction between the impact targets in a separate survey.

This report is a follow-up to that process. Using the preliminary survey as a basis, the report provides a national overview of the current state of incident prevention by rescue services in relation to the impact targets, and it discusses interaction between the impact targets and brings together the ideas proposed in workshops for all to use.